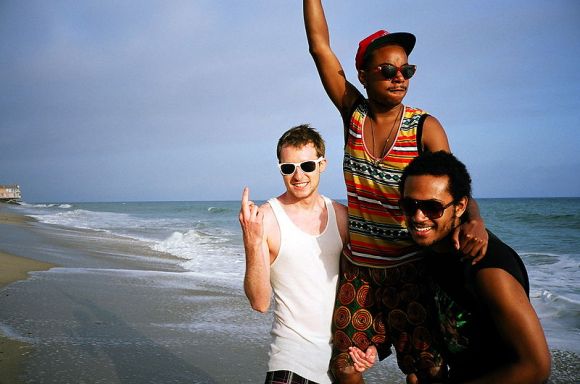 Supreeme gave us the privilege to release what-is-said to be their FINAL album together, God Bless the Child. Yes, rumors are true, they have disbanded… I was honored to sit back and listen to it for it’s first review, although it is somewhat saddening. You can basically say Supreeme birthed the “hipster scene” in Atlanta back in 2004, beating everyone to the punch from skinny jeans to the “80′s Crack Dealer” fashion phase. Still on a similar path set by their sophomore album, Silver Medallion, of fast tempo, bass heavy beats; lyrically Supreeme has taken a more morbid, but religiously inspired route. While managing to stay true to their early chick-loving, carefree personalities; they sacrificed their cocky, globe-trotting flows for more personal, bittersweet subject matter. Which is how they feel about each other. Unfortunately, this project was recorded after KingSelf (aka Sam) left the group, so only one song features him… Tom Cruz (aka The Dope Pope) states:

Dear Friends, This is God Bless the Child- Supreeme’s last Testament. Thank you, all who worked on it. This is not mixed or mastered ( well only in a “I’m high so I got to hear it right now” way) but I feel it is my greatest work so far and I want you all to hear it. Beats, rhyming all that. These past 6 yrs in this group Negashi, Sam and I said that we all had to say together and this IS the last album and recordings of a group called Supreeme, never say never, but for now that is what it is…. Well ain’t shit else to say, enjoy. …thanks to Paul Katzman the engineer who transformed his room into a studio this past summer… That guy is the best…

“Available exclusively here at Greedmont Park, this is definitely something you don’t wanna miss.”

And shout out to Greed Mount Park for having their ear to the streets and always breaking the best in new music.